A revised view on promiscuity in the adult (gut) 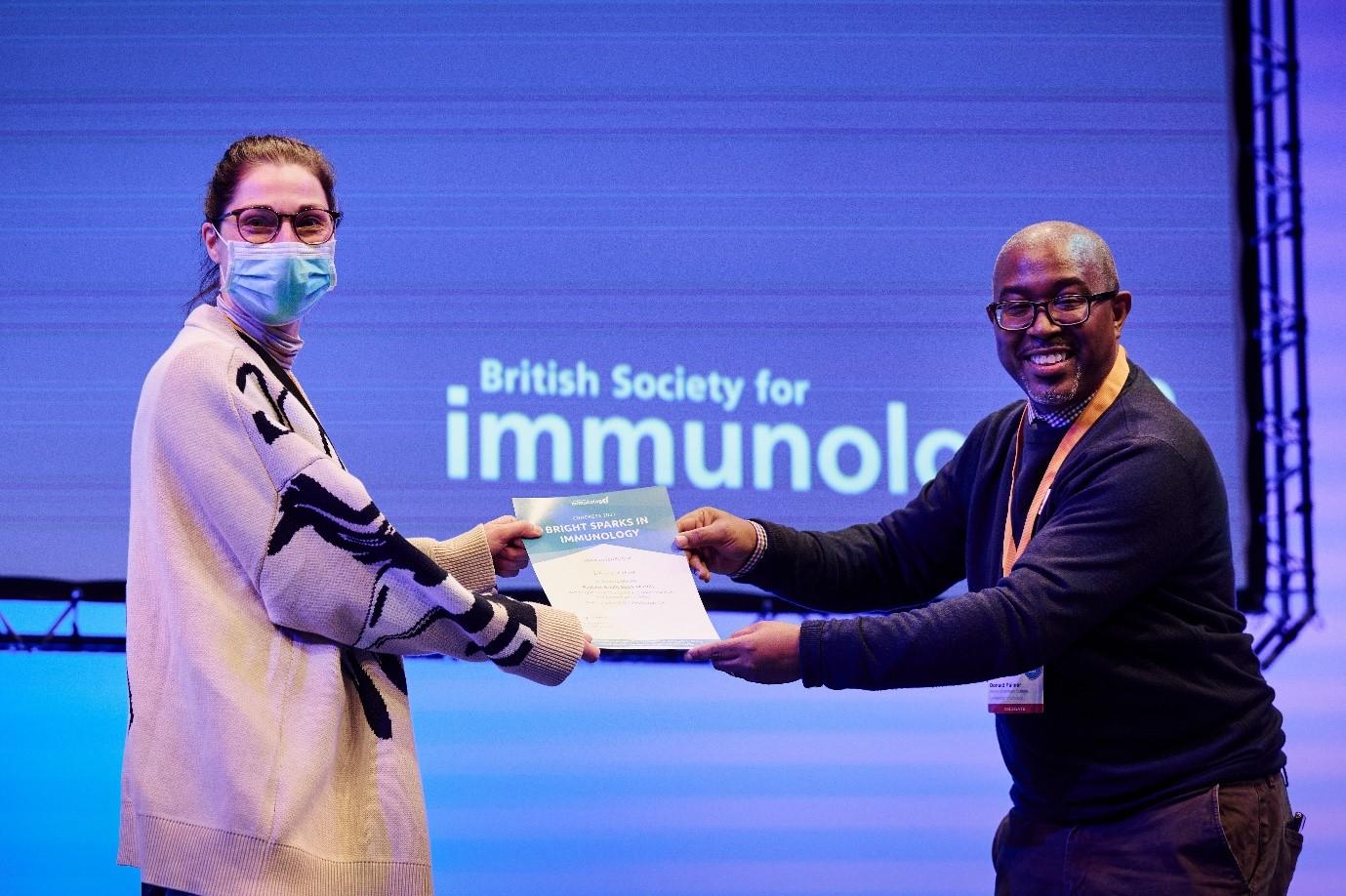 The winner of our Bright Sparks Postdocsession at the BSI Congress in 2021 was Dr Johanna Kabbert from Lund University with her talk entitled ‘High microbiota reactivity of human intestinal IgA requires somatic mutations’. Here, Johanna tells us more about her research on the underlying mechanisms
and effects of IgA binding to different microbial species in the gut, introducing a new aspect of IgA–microbiota interactions in the adult intestine.

Terms like ‘work–life balance’ and the ‘importance of a beneficial microbiota’ to host health and gut homeostasis are no longer obscure concepts but have entered the vocabulary of our everyday lives and seem to go hand in hand with a well-balanced diet. Similarly, there is more awareness of the consequences of an ‘unhealthy’ microbiota regarding diet-associated intestinal inflammation and inflammatory bowel disease (IBD), both associated with dysbiosis. Dysbiosis, a major shift in microbial composition, has been linked to a variety of diseases – not only confined to the intestine but affecting the entire body e.g. metabolic syndromes such as obesity and diabetes and even neurological disorders.

The intestine – home to the good and the bad

The intestine is the largest mucosal surface in the body and home to trillions of symbiotic bacteria – the microbiota. The companionship of the intestinal microbiota is evolutionarily conserved and is essential to host health. The host immune system is in constant and mutualistic dialogue with the microbiota that is required to maintain gut homeostasis. Miscommunication in this dialogue and inappropriate immune responses can drive dysbiosis where opportunistic microbial members become disease promoting (pathobionts). A hallmark host immune response at intestinal mucosal surfaces is the production and secretion of immunoglobulin A (IgA) into the gut lumen. In the gut, IgA is the most abundant antibody isotype and protects the host from pathogens and viruses. Intestinal IgA not only binds pathogens but also targets a large fraction of the microbiota in the steady state gut. Thus, the binding of IgA to gut bacteria has both positive and negative outcomes and is crucial to prevent dysbiosis.

IgA and the microbiota – stay connected with your friends

In the gut, IgA can be generated either with or without T cell help – pathways referred to as T cell dependent (TD) and T cell independent (TI). The mechanisms of how IgA protects the host from pathogens are relatively well described. Functional outcomes, including immune exclusion and neutralisation of pathogens, require highly specific immune responses against the respective antigen. Here, effective IgA responses rely on TD affinity-matured antibodies, where somatic hypermutation (SHM) and affinity maturation finetune antibody specificity and affinity to the invading pathogen. However, the functions of IgA seem to extend beyond merely protecting against pathogens, as IgA is also generated in response to the intestinal microbiota in the absence of overt pathogenic challenge.

How exactly IgA interacts with the microbiota and what factors determine which members of the microbiota are targeted in the steady state gut is less clear and it is still controversial whether microbiota-binding IgA relies on T cell help. A lot of this controversy stems from the model species used for experimental analysis. Perhaps unsurprisingly, in young laboratory mice that are rarely exposed to changing antigenic challenge, most of the microbiota-binding IgA is of TI origin. However, recently it has been shown that, in adolescent mice, TD responses give rise to microbiota-targeting IgA, thus both TI and TD IgA responses can contribute to microbial coating. This scenario is even more complicated by different binding modes described for IgA–microbiota interactions, including canonical binding that relies on Ig–Fab mediated binding, non-canonical binding, mostly facilitated via glycans, and polyreactivity i.e. unspecific binding to structurally unrelated antigens. Collectively, it is hard to say which mode of binding is predominant as diverse binding modes may co-exist and, until recently, in the human gut, the exact contributions of these pathways to microbial IgA binding were never systematically resolved.

For us, the major unanswered question remained, what are the underlying mechanisms and effects of IgA binding to the microbiota in the gut, as IgA binding evidently does not lead to the eradication of entire microbial species. We speculated that IgA induced in response to the microbiota in the adult human intestine may rely on distinct mechanisms and may even have the opposite effect to immune exclusion, i.e. promoting inclusion of microbial members in distinct intestinal niches.

The quest for the mechanism of IgA cross-species reactivity

To assess the molecular basis of IgA binding to the microbiota and whether the IgA–microbiota system may differ in inflammation we tested a large panel of monoclonal IgA antibodies (mAbs), derived from intestinal plasma cells from either healthy donors or IBD patients, for their microbiota reactivity. To our surprise, an unexpectedly large proportion of single mAbs showed substantially high microbiota-binding capacity, with some mAbs binding up to 30% of intestinal bacteria. Considering the relative abundances of all the different microbial species in the gut, this suggested that IgA binding may not be limited to a single species. Ultimately, bacterial 16S sequencing revealed that single mAbs, from both healthy donors and IBD patients, bound multiple species of the microbiota, often phylogenetically unrelated. Moreover, some bacterial species were commonly targeted by multiple mAbs whereas others were exclusively bound by single mAbs only.

We coined this ‘promiscuous’ mode of IgA–microbiota binding ‘cross-species reactivity’. In addition, cross-speciesreactive antibodies did not uniformly enrich all members of a targeted species, implying that cross-species-reactive IgA may target distinct genetic sub-strains within bacterial species or bacteria in a particular growth state. Importantly, neither polyreactivity nor non-canonical binding accounted for microbiota cross-species IgA binding. Instead, cross-species-reactive IgA mAbs had substantial numbers of somatic mutations, typically a feature of TD affinity maturation. By reverting these mutations of IgA mAbs to generate germline variants we finally found the answer to our quest. The majority of germline variants lost their microbiota-binding capacity, revealing that accumulated somatic mutations were indeed key to high microbiota binding and cross-species reactivity. Notably, the majority of both mutated and germline mAbs exhibited little to no polyreactivity indicating that the acquisition of somatic mutations is chiefly responsible for the broad but specific binding of IgA mAbs to
different members of the microbiota.

Our results may appear counterintuitive – bending the principle of increased specificity as a result of affinity maturation found in immunology textbooks. Nevertheless, we found that SHM refines IgA responses in such a way that they become broadly binding but not at the expense of specificity and affinity, a mechanism that is distinct from polyreactivity.

Our findings raise some important questions about the nature of IgA responses to the microbiota. First, what is the evolutionary benefit in maintaining such a system? In both the healthy and inflamed intestine, the presence of cross-species-reactive antibodies likely increases the probability of antibody encounter with intestinal bacteria, enabling efficient host–microbiota interactions and possibly contributing to effective antibody–pathogen agglutination.

Second, it remains unclear which bacterial structures enable the initiation and selection for cross-species IgA reactivity and how these complex processes are regulated in vivo. We propose that bacterial glycans or peptides conserved across phylogenetically unrelated bacteria may be prime candidates to allow for the selection of cross-species reactivity. Mechanistically, the continuous exposure to varied but conserved bacterial structures may act as the initial antigen and ultimately drive the selection of cross-species reactive B cells. Here, the re-entry of circulating memory B cells into gut-associated lymphoid tissues exposed to different antigenic environments may lead to successive accumulation of mutations during multiple rounds of affinity maturation, thus shaping the generation of cross-species-reactive IgA-secreting plasma cells. While microbiota reactive antibodies in young mice and human newborns include polyreactive responses, we suggest that, during ageing, these ‘early’ polyreactive antibodies become gradually supplanted by affinity-matured, cross-species-reactive antibodies representing a common mechanism of IgA–microbiota binding in adulthood.

Finally, we were very happy to have contributed to the concepts of B cell biology by introducing a new aspect of IgA–microbiota interactions in the adult intestine. Paradigms are not the limit of research – they are often just the beginning.

Present your work at BSI Congress 2022!

Abstract submission for oral presentations has now closed, but you can still submit an abstract before Friday 28 October for the chance to present your work as a poster.

We also have a dedicated poster topic ‘Education, public engagement and EDI’ for abstract submissions to showcase innovative techniques being used in immunology teaching, novel approaches to engaging with the public on immunology and best practice examples of promoting diversity and inclusion within immunology.