A unique position to inspire the public: how do our bodies fight viral infections? 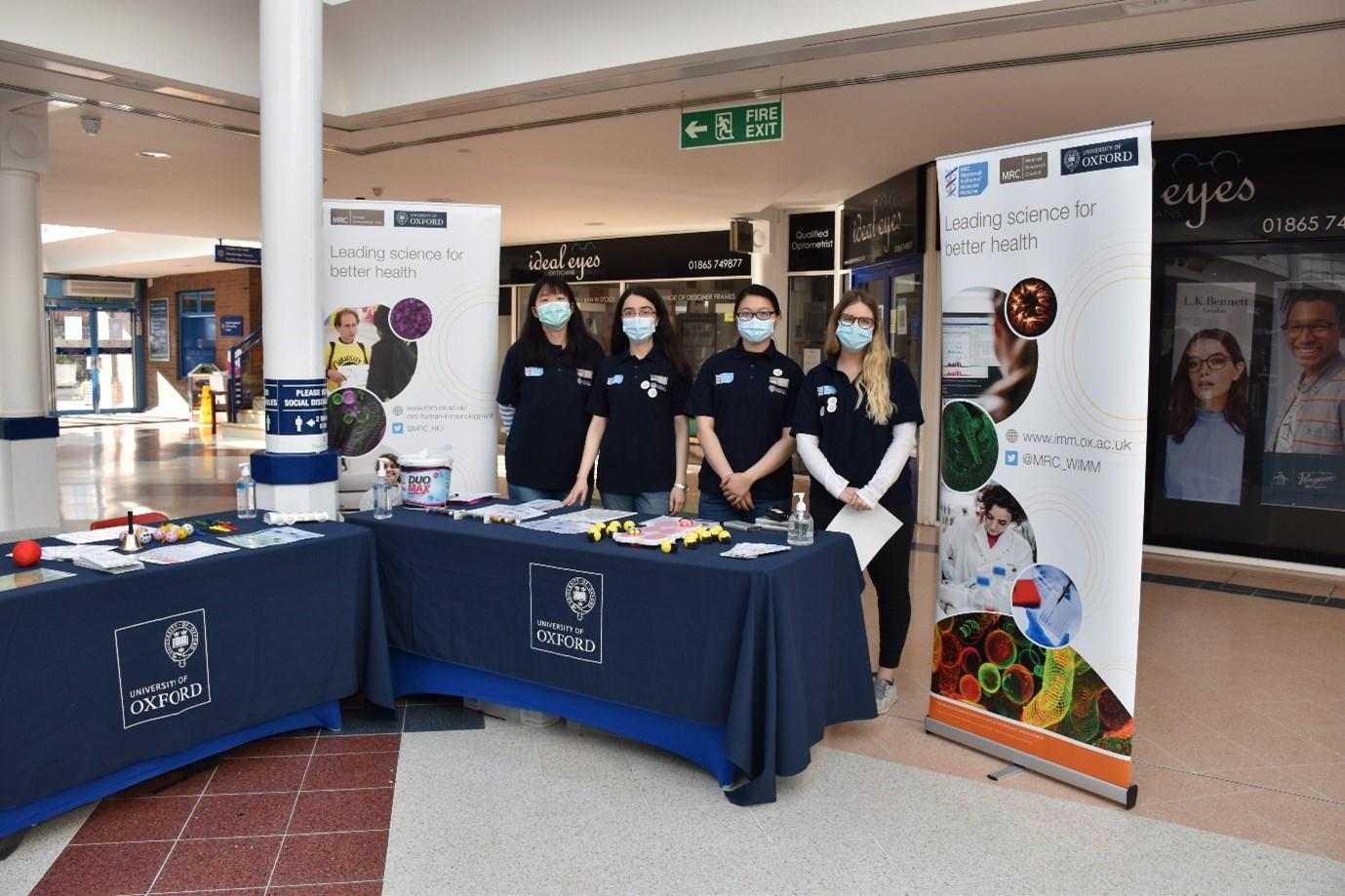 Volunteers at the MRC WIMM stall as part of the IF Science and Ideas Festival 2021; Gulnar Abdullayeva, Zixi Yin, Vivien Ho and Lizzie Horton (L-R).

To continue responding to the increased curiosity of the public following the pandemic, researchers at the University of Oxford developed activities about virus biology and the immune responses to viruses for the Oxford Science and Ideas Festival. Here, the organisers share their experience and learnings.

The Oxford Science and Ideas Festival is a not-for-profit charity which organises a festival every October in various locations across the city. In 2021, 575 people from businesses, universities, nonprofit groups and communities engaged around 35,000 people over 19 days.

The festival encompassed one-off discussion sessions, such as ‘Why is getting it wrong good for science’, hosted by Elsevier at the Natural History Museum; and workshops such as ‘How to bake a star on Earth’, run by the UK Atomic Energy Authority, in which participants baked doughnuts and learned about fusion energy (the power of stars), research of which occurs in doughnutshaped fusion machines. There were also exhibitions such as Explorazone in the Town Hall and Science at the Shops.

Ten of our researchers took part this year, engaging the public and fostering conversations about the important immunological research we do at th MRC Weatherall Institute of Molecular Medicine at the University of Oxford. The BSI supported our participation in this event with a Communication & Engagement Grant to fund reusable resources for the activities.

As part of Science at the Shops, we held a stall in Templars Square Shopping Centre with the theme ‘Fighting viral infections’. We aimed to engage with members of the community, teaching them what viruses are and how our immune system detects and fights them. We decided to focus our attention on innate immune and T cell responses to virus infection as we felt that the B cell and antibody responses had already been widely discussed in the news during the pandemic.

To develop these ideas, we thought of the key messages we wanted the public to take away from the stalls, and then fun, practical ways to display them for adults and children. One key message was that cells use innate sensors to recognise viruses and sound the alarm to alert the rest of the immune system. To demonstrate, we asked visitors to remove viral genetic material (pipe cleaners) from balls to represent endosomes expelling genetic material into the cytoplasm. The genetic material was then wrapped around the corresponding innate receptor (golf tee) and a bell was rung.

Next, we described what happens to viral proteins in the cell using a tube and magnetic beads. Each bead represented an amino acid of the viral protein and long strings of these were fed through a proteasome tube and chopped into smaller strings using sliders.

The importance of these small viral protein fragments was then described in our final activity. T cells recognise small protein fragments on the surface of cells bound to MHC molecules. Using a 3D-printed bank of cells expressing MHC, visitors were asked to find the correct T cell ping pong ball that fitted onto the MHC like a jigsaw puzzle. Once the correct T cell was identified and fitted together, it would either light up yellow to show that the cell was healthy or red to show that the cell was infected and needed to be killed.

After interacting with each activity, we hoped that visitors understood what a virus is, how they are sensed and that T cells specifically sense infected cells and kill them. We had accompanying posters and leaflets to go more in-depth for older audiences.

Over the weekend, we spoke to around 200 members of the public – hijacking their casual shopping trips! The reaction to the exhibition was very positive, with all volunteers receiving excellent feedback, some children returning multiple times and some groups spending over 30 minutes with us. We also spoke to a few teachers who took pictures and notes about the stand so that they could talk to their classes about it the following week, showing that our explanations and activities were simple enough for the information to be passed on.

As activity designers, it was rewarding to see our ideas come to life and engage children and adults about the research that we do. As volunteers at the event, we were able to discuss somewhat complex research questions and scientific ideas at a level understood by all, showcasing the importance of medical research. This allowed reflection on how niche and ‘cool’ our jobs as research scientists are, and our unique position to educate and enthuse the public about it too.