Angioedema due to acquired C1-Inhibitor deficiency

Acquired angioedema (AAE) due to deficiency of C1-inhibitor is a relatively infrequently occurring but serious disorder, resulting in severe, sometimes life-threatening, episodes of angioedema. The precise incidence is unknown.
Clinically, angioedema caused by an acquired deficiency of C1-inhibitor is indistinguishable from hereditary angio-edema (HAE). However, the condition usually occurs in adults over 40 years of age and there is no familial predisposition. Angioedema typically affects the face, the oropharyngeal and laryngeal region (which may cause airway obstruction), the mesenteric and intestinal site (causing severe abdominal pain, diarrhea and vomiting), the genital region, or extremities. Physical or psychosocial stress are recognized as provoking factors for an angioedema attack, however, in many cases, no clear triggers can be identified. 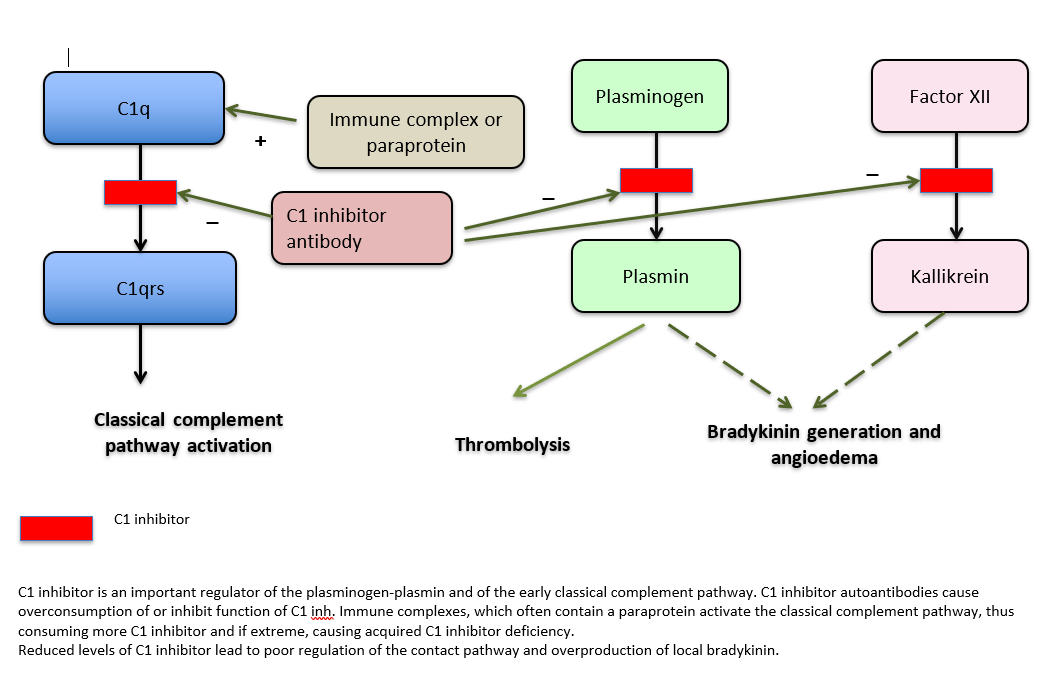 The diagnosis of acquired angio-edema is based on a (very) low level of C1-inhibitor concentration and its function and (usually) low complement factor 4 (C4) levels. In contrast to hereditary angio-edema, plasma levels of C1q are decreased in AAE which sometimes helps with the differential diagnosis. Anti-C1 inhibitor antibodies can be detected in some but not all cases. If there is doubt whether the deficiency of C1 inhibitor is hereditary or acquired, genetic analysis of the SERPING1 gene can exclude or confirm any pathogenic mutations associated with HAE. In cases where there is a strong suggestion the angioedema is hereditary genetic analysis may find mutations in genes for factor XII, plasminogen or angiopoietin-1.
Most clinicians will screen for a lymphoproliferative disorder in patients with acquired angio-edema by physical examination and looking for lymphoadenopathy, performing a CT chest and abdomen as well as assessing a full blood cell count, serum immunoglobulins and paraprotein.

The efficacy and safety of new agents used for the treatment of hereditary angio-edema (such as oral or subcutaneous kallikrein inhibitors) needs to be investigated and established in patients with acquired angio-edema due to C1-inhibitor deficiency.
A better understanding of the pathogenesis of lymphoproliferative disorders causing acquired C1-inhibtor deficiency may lead to more targeted and effective treatment modalities.