Exosomes are nanometer sized vesicles, typically 30-100nm in diameter. They are manufactured within the endosomal system, as multivesicular bodies (MVB), which are ultimately secreted into the extracellular space. They exhibit a typical bi-layer lipid membrane, which is high in cholesterol, ceramide and has phosphatidyl serine (PS) residues evenly distributed between outer and inner membranes; as such they may appear to the immune system as apoptosis-related particles. Exosomes express a sub-proteome of the cell, high in membrane associated and cytosolic proteins, while poorly representing mitochondrial, nuclear and other cell compartments. Curiously, exosomes also encapsulate mRNA and also microRNA species, and can transfer these to other cells to modulate the recipients’ transcriptome. Exosomes are viewed as a natural mechanism for cell-to-cell communication, with varied roles in physiology. Most of our understanding of exosomes, however, stems from investigations into their capacity to modulate immunity.

Some cancer-associated antigens are highly enriched on cancer cell exosomes.  Other molecules, such as adhesion molecules, stress-proteins, lactadherin and lipid residues like PS, may facilitate the selective uptake of cancer exosomes by dendritic cells (DCs). Thus exosomes may act as a vehicle for delivering antigens to DCs, which can cross-present to T cells, and activate cytotoxic (CD8+) T cell responses against the cancer antigens.

However, the immune-activating function of cancer exosomes is controversial, and may not be true at all in situations of advanced/progressive disease. Several mechanisms have been described, showing cancer exosomes can actively interfere with correct immune function. Cancer exosomes can inhibit the differentiation of DCs (from precursor cells), and may trigger the development of TGFb-producing myeloid suppressive cells (MSC). Cancer exosomes may directly express functionally active TGFb, which can inhibit effector T-cell function while activating regulatory T cells. Other molecules include the MHC-like ligands of NKG2D, which are expressed by cancer exosomes, and act to systemically switch off the NKG2D-dependant mechanism for NK and T cell activation.  Some reports also describe Fas-positive exosomes, which can bind to Fas-ligand on activated T cells, triggering their death. 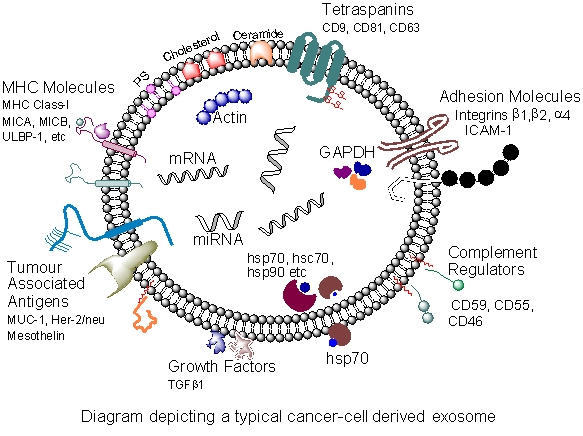