Within the last few decades it has become clear that T helper (Th) cells cannot simply be divided into Th1 and Th2 cells. The re-discovery of CD4+ regulatory T cells (Tregs) (from archived suppressor T cell studies) and even more recently the discovery of Th17 cells has further extended the CD4+ Th cell family.

It has been suggested that one Treg cell can influence numerous surrounding cells. With such potency, it is no surprise that these cells have been investigated as possible therapies for many diseases. Manipulation of Treg cell numbers by the addition of cytokines or parasites has been shown to be effective in controlling many aspects of inflammation. 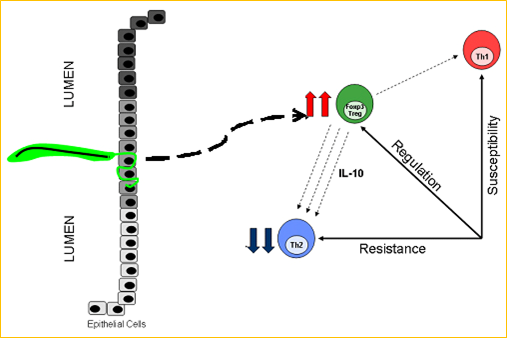 Potential Helminth Survival strategy and Therapeutic Target. Helminths increase Treg numbers in the gut. These increases have regulatory effects on Th2 effector cells most likely by increasing production of IL-10. The Th2 response is dampened and, as a result the parasite is not expelled. Understanding the parasite- host interaction may lead to potential therapeutic candidates to treat inflammatory diseases.

Parasites have evolved in many different ways to avoid detection by their host and to manipulate their host’s immune system in order to gain an advantage and survive. The induction and/or manipulation of Tregs by parasites may be one such method to aid their survival. It may additionally be of some therapeutic value: many nematodes have been shown to stimulate an increase in Treg cells in the host post-infection in diseases such as Crohn’s disease, multiple sclerosis and ulcerative colitis in which immune regulation has been disrupted. Early studies using nematodes to treat autoimmune diseases have yielded encouraging results. T.suis, a pig whipworm related to the human parasite T.trichiura, has been shown to alleviate disease symptoms in patients suffering from colitis.

Removal of parasite-induced Tregs with cocktails of antibodies has been shown to affect the survival of helminths and other parasites within mouse models. When Treg cells were depleted in Litomosoides sigmodontis-infected mice using combinations of anti-CD25 and anti-CTLA4 or anti-CD25 and anti-GITR antibodies, parasite numbers were reduced. These studies suggest that the Treg cells aid parasite survival and that the parasite might have evolved the ability to induce Treg cells to do so. Conversely, other studies suggest a role of Tregs in the protection of the host against immune pathology, with anti-GITR or anti-CD25 causing mortality of mice following Trypanosoma cruzi infection. Thus Treg cells are important not only for parasite survival but also for regulation of the host inflammatory response. Indeed, it is essential for the host to find an equilibrium, which may mean that, in some cases, the parasite will survive.