A virus can be simply defined as an obligate intracellular parasite. Each viral particle, or virion, consists of a single nucleic acid, RNA or DNA, encoding the viral genome surrounded by a protein coat, and is capable of replication only within the living cells of bacteria, animals or plants. Viruses are classified into different orders and families by consideration of the type of nucleic acid present (RNA or DNA), whether the nucleic acid is single- or double-stranded, and the presence or absence of an envelope.

Structure: A typical virus consists of a protective protein coat, known as a capsid. The capsid shape varies from simple helical and icosahedra forms to more complex structures with tails. The capsid provides protection for the viral genome against the environment and functions in receptor recognition, targeting the virus to a susceptible host and cell type.

Some viruses have a phospholipid envelope, derived from the infected host’s cell membrane, that surrounds the protein capsid. Inserted into the lipid envelope there are usually viral encoded proteins know as spike projections – these are typically glycoproteins and are also involved in receptor recognition and viral tropism. A classical example of this is the neuraminidase and haemagglutinin glycoproteins expressed on the surface of the influenza A virus. 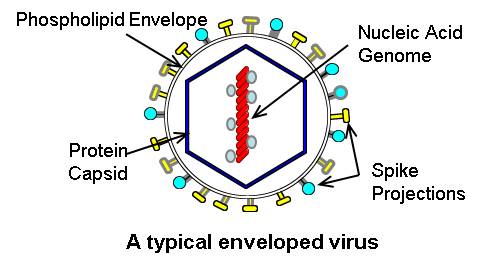 Virus tropism: Viruses are the most abundant and diverse pathogens on earth. Millions of years of evolution, in close proximity to their hosts, has resulted in highly precise mechanisms in which they target and infect host cells. The first stage of viral tropism is determined by the route of infection needed to gain access to the specific host tissue. For example the influenza A virus is transmitted through infected aerosols during coughing and sneezing, which allows the virus direct access to the respiratory tract where its target cells are located.

After gaining access to the specific host tissue, target cell infection is achieved at the initial stage of virus replication when the virus recognises and binds to a receptor on the target cell surface. An extensively studied example of such specific receptor-mediated recognition is the interaction between the CD4+ co-stimulatory T-cell receptor and CCR5 on human T lymphocytes and the gp120 and gp41 proteins, respectively, on the surface of human immunodeficiency virus (HIV).