Cancer refers to a category of diseases where cells behave abnormally and proliferate rapidly, eventually spreading to other parts of the body. While cancer cells are one’s own cells, they become so mutated that immune cells can recognise them as almost foreign pathogens, allowing them to mount a targeted immune response against cancer cells. Moreover, cancer cells, much like pathogens, can evade immuno-surveillance and dampen anti-tumour immune responses. The study and manipulation of this dynamic interaction between cancer and immune cells has laid the underpinning for a novel therapeutic approach to cancer – cancer immunotherapy.

While it is important for one’s immune system to generate robust immune responses against potentially harmful stimuli, it is equally important for the immune system to resolve such an immune response, as a persistent or over-zealous response can be just as damaging. Therefore, cells of the body are equipped with molecules to help inhibit immune responses, termed “immune checkpoints”.  An example of this sort of molecule is PDL1, a receptor on the surface of cells that interacts with its specific receptor, PD1, on T cells. While PDL1 is expressed on healthy tissues, cancer cells over-express this ligand. Therefore, when T cells interact with a cancer cell, they are overwhelmingly suppressed by the PD1-PDL1 interaction. Researchers have developed a monoclonal antibody therapy that binds to PDL1, blocking the interaction with PD1 on T cells and relieving the immunosuppression imparted by the tumour. The result is enhanced immune-mediated killing of the tumour. This immunotherapy has moved into clinical trials, where it has been extremely effective in PDL1-expressing tumours, particularly in forms of malignant melanoma. In fact, the 5-year survival rate of malignant melanoma patients undergoing PD1/PDL1 therapy has more than doubled. Blockade of a similar inhibitory receptor, CTLA4, has comparable potential. 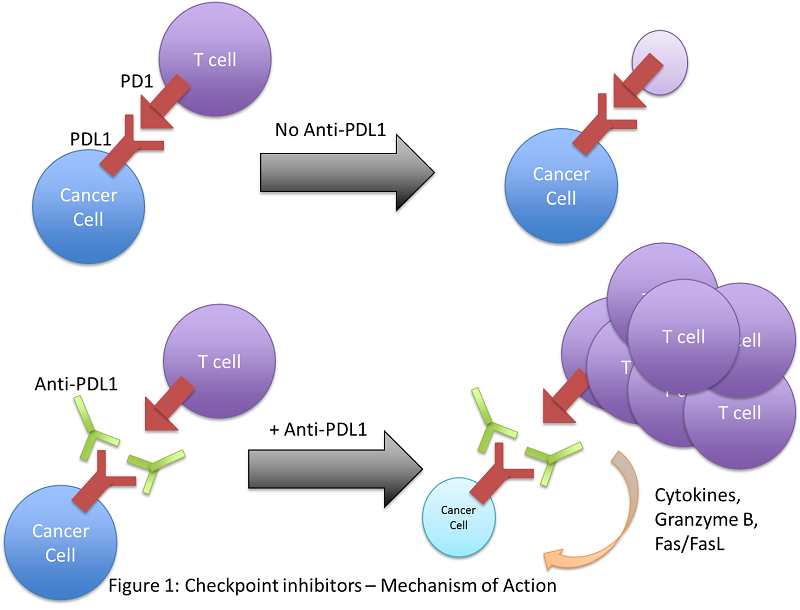 While most cancer immunotherapy strategies target the adaptive branch of the immune system, immunogenic cell death (ICD) inducers aim to alert the innate branch. This strategy involves using chemotherapeutic drugs to provoke a type of cell death in tumour cells that will activate innate immune cells, which can consequently orchestrate an all-encompassing anti-tumour immune response.

When cancer cells die, for example, by necrosis, they release molecules called danger-associated molecular patterns (DAMPs) that are usually contained within the cell, not in the extracellular milieu. These DAMPs can be recognised by receptors on macrophages and dendritic cells, including toll-like receptors (TLRs), and initiate a broad immune response in what is termed “sterile inflammation”. While this finding stemmed from chemotherapy research, scientists are now focusing on identifying drugs that can induce immunogenic cell death of cancer cells and instigate an immune response. Herein lies an opportunity to bridge chemotherapy with immunotherapy. 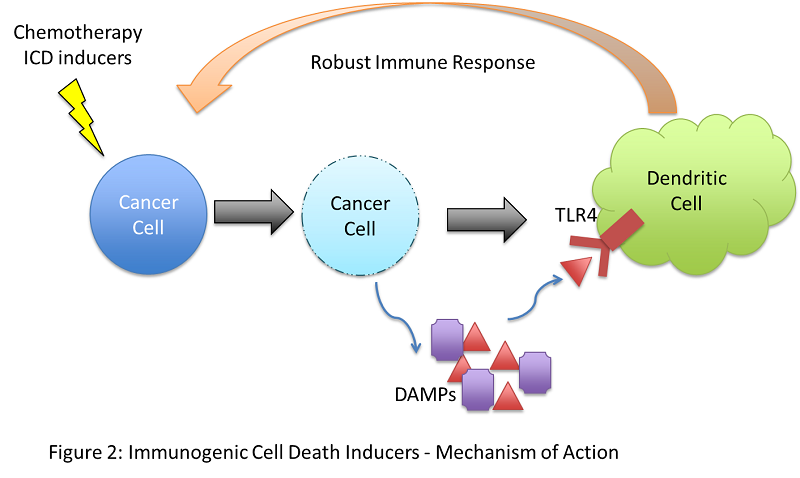 Research into immune responses against cancer has demonstrated that cancer cells, due to their high mutation rate, bear a number of altered self-proteins. In fact, they become so abnormal that immune cells, namely T cells, recognise these proteins almost as foreign antigen, and can mount an immune response against cells bearing this abnormal protein – an immune response targeted at cancer cells. These cancer-specific, mutated self-proteins are termed “neoantigens”.  This finding serves as the basis for chimeric antigen receptor (CAR) T cell therapy. Based on the peptide sequence and structure of neoantigens, a T cell receptor, specific for the neoantigen on cancer cells, can be engineered and expressed on T cells. Via adoptive transfer, these T cells could be introduced into a patient and drive a targeted anti-tumour immune response to eradicate the cancer. However, CAR T cell therapy is limited at recognising surface expressed neoantigens and would be difficult to implement in clinics. ImmTAC is a similar strategy developed in the UK by scientists at the company Immunocore. ImmTACs are fusion proteins containing an anti-CD3 antibody fragment to bind existing TCRs in non-cancer specific T cells and a CAR that can recognise intracellular neoantigens presented on MHC molecules expressed on the surface of cancer cells. This sort of therapy would allow recognition of intracellular neoantigens, not just surface-expressed ones, and also convert pre-existing T cells into cancer specific effector cells without the need for adoptive transfer. 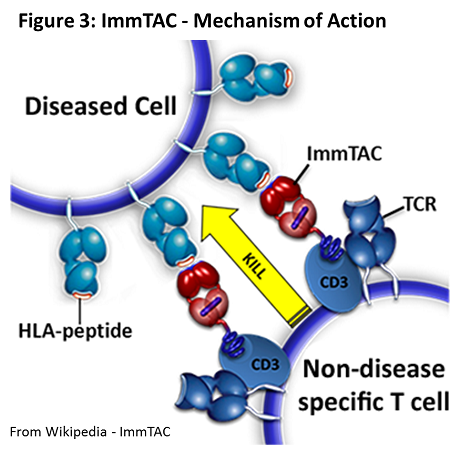 Directions for the Future: Cancer vaccines

As current ideas for cancer immunotherapy focus of treating patients diagnosed with cancer, the possibility of developing a prophylactic treatment, in the form of a cancer vaccine, is perhaps not too far in the future. Invariant Natural Killer T (iNKT) cells, a subset of lipid-specific innate-like lymphocyte, are critical in anti-tumour immunity. Recent research suggests that strong lipid antigens which, through iNKT cell activation, augment widespread anti-tumour responses could be used as adjuvants in the development of a cancer vaccine, with tumour-specific neoantigens serving as the main immuno-stimulant to target the immune response towards the tumour.

The early success of these immunotherapeutic approaches to fight cancer, just a few years after its development, earned cancer immunotherapy the title of “Scientific Breakthrough of the Year” in 2015 by Science magazine. Harnessing the power and specificity of the immune system has changed the way scientists and clinicians approach cancer treatment.

© The copyright for this work resides with the BSI.