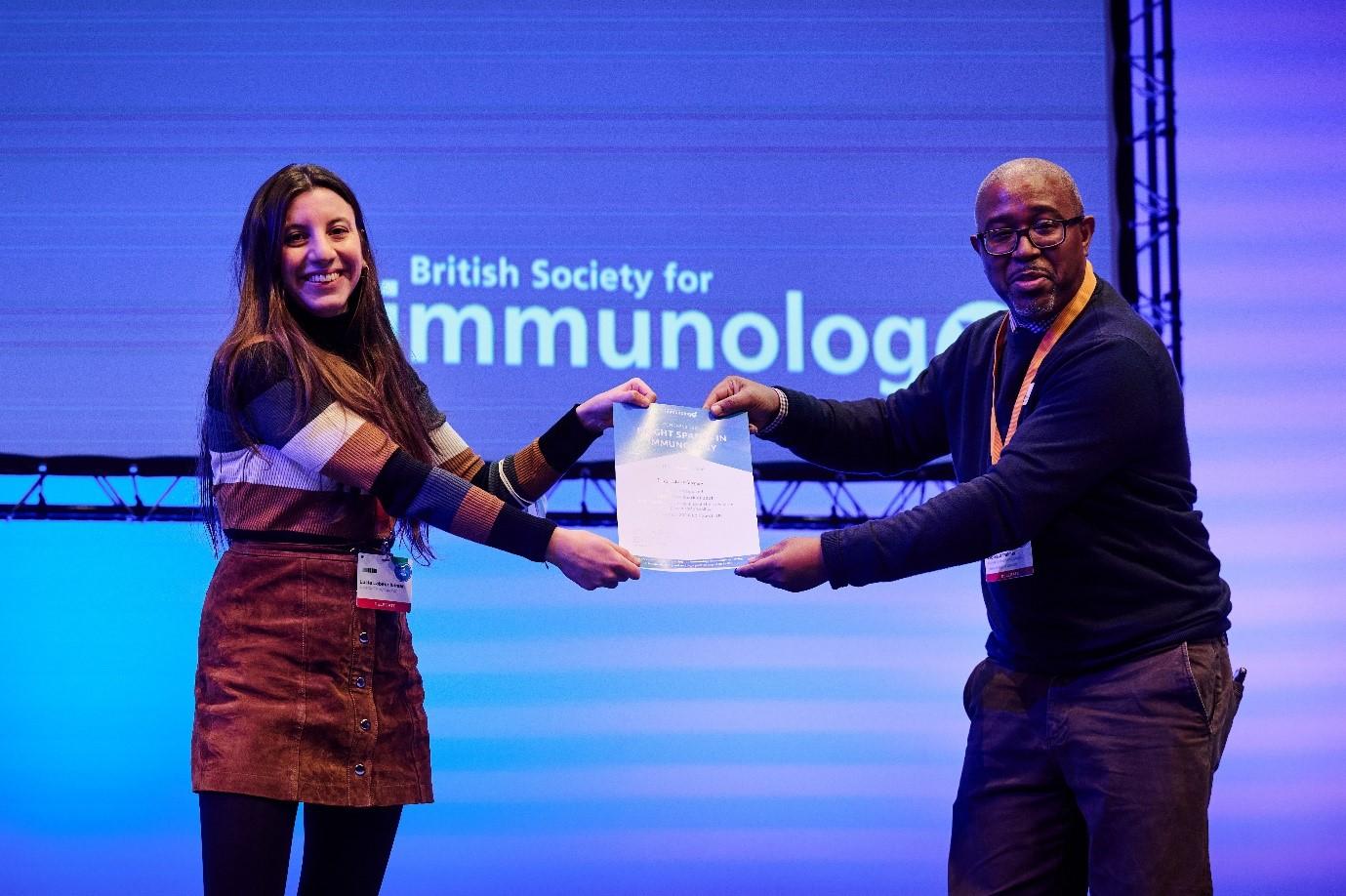 The winner of our Bright Sparks PhD session at the BSI Congress in 2021 was Lucía Labeur-Iurman from Imperial College London with her talk entitled ‘An enriched IL-2 environment in early life limits T follicular helper cell development and protective immunity after respiratory virus infection’. Here, Lucía tells us more about her research on the immune response to RSV in early life and what it means for long-term protective immunity and potential therapies.

It might be hard to believe, but SARS-CoV-2 is not the only existing respiratory virus. In fact, despite infants seeming to have a continuous runny nose and high fevers – just ask any parent – SARS-CoV-2 is very unlikely to be the cause of it. There is however one respiratory virus, despite its relatively anonymity, which is the leading cause of colds in children, the major cause of viral bronchiolitis in childhood, a main cause of infant hospitalisation, and one of the leading infectious mortalities in children under one-year old: respiratory syncytial virus or RSV.

RSV – a leading cause of mortality in children

RSV was first isolated in 1956. Today, almost 70 years later, RSV is still considered the leading cause of viral bronchiolitis in children under five. It is estimated that 95% of children worldwide have been infected by two years of age, resulting in a high number of hospitalisations in high-income countries and more than 100,000 deaths per year in low-income countries. Age is considered the strongest risk factor for developing severe disease after RSV infection, with one-third of infants developing severe bronchiolitis, but RSV only causes mild upper respiratory tract infection in the majority of adults.

RSV infection in early life is also concerning due to its associated sequelae, since infection with this pathogen represents an independent risk factor for the development of wheezing and allergic asthma in later life. Despite over 60 years of scientific effort, however, there is still no licenced vaccine against RSV, with the safe generation of immunity in infancy being particularly challenging. Indeed, both the RSV vaccines that have been trialled and RSV infection itself seem to cause poor specific antibody responses, which diminish relatively quickly, both in adults but particularly in children. Immune responses are so poor than people are routinely re-infected by a serologically identical RSV every one to two years, and it is not uncommon for children under five to get re-infected even in the same winter season.

So why is immunity to RSV, especially in early life, so limited? Early life is the period when we encounter the vast majority of antigenic stimuli we will ever see. Most importantly, we do so for the first time. Infancy is also the time where most of us receive the majority of our vaccinations.

In spite of all this, our understanding of the early life immune system is primarily extrapolated from immune responses observed in adults and adult models. But, when you actually examine the infant immune system you begin to realise that it does not quite function in the same way as it does in adults. In line with this, both our group and others have reported that the generation of high-affinity antibodies – which are critical to providing longlasting immune responses against most common antigens and are the basis of most vaccinations – is often limited in early life. The lab, and my research, is therefore focused on understanding what mechanisms lead to this impaired antibody response in infancy and if they can be modified in order to improve immunity.

There are rightly many restrictions to studying infant immunity, especially in children experiencing severe illness. Therefore, to study the humoral immune response against RSV we used a mouse model of infection, where we can replicate most of the phenotype observed in humans. When given the same dose of RSV to one- and two-week-old mice (early life mice) and eight-week-old mice (adult mice) we saw that the generation of RSV-specific antibodies was reduced in early life when compared with adults. Concomitant with this poor antibody response, mice initially infected at one or two weeks of age also showed limited protection from re-infection.

The generation of high-affinity antibody responses predominantly takes place in germinal centres (GCs)– anatomically distinct areas within the B cell zones of secondary lymphoid organs where B cells can undergo somatic hypermutations and affinity maturation under the control of T helper cells. T follicular helper cells, or TFH, are responsible for providing the specific cues that drive B cells to differentiate into memory B cells or plasma cells able to produce high-affinity antibodies. Because low-affinity antibody responses are observed in early life, and because the same outcome – propensity to re-infection – is observed in adult mice lacking TFH cells, we speculated that the cross-talk between TFH and B cells might be diminished in infancy. Indeed, in our RSV mouse model, we saw that, even though the amount of RSV-specific CD4+ T cells was the same across all ages analysed, the differentiation of these cells towards TFH was reduced in early life when compared with adults.

In our RSV mouse model, we saw that, even though the amount of RSV-specific CD4+ T cells was the same across all ages analysed, the differentiation of these cells towards TFH was reduced in early life when compared with adults.

Last piece of the puzzle

The most accepted view in the field is that TFH differentiation depends on the balance of two signalling and transcription molecules which commonly act downstream of cytokines, STAT3 and STAT5. The literature supports the fact that, both IL-6 and IL-12, which are the main cytokines driving TFH differentiation in mouse and humans respectively, promote the phosphorylation of STAT3. Conversely, IL-2 would promote STAT5 phosphorylation which in turn will drive naïve CD4+ T cells to differentiate into alternative pathways such as TH1 or TH2.

Interestingly, we observed an enriched IL-2 environment in early life when compared with adulthood, since the production of IL-2 was increased in one-week-old mice when compared with the eight-week counterparts in both RSV infected and baseline conditions. Early life naïve CD4+ T cells also have an increased expression of IL-2 receptors and our experiments showed an increased predisposition of early life antigenexperienced CD4+ T cells to phosphorylate the TFH antagonist STAT5 over the pro-TFH signal STAT3. So, it is not only that IL-2 is more readily available in early life when compared with adulthood, but the ability to interact and respond to this cytokine is also increased, potentially explaining the poor TFH differentiation observed in infancy. To further confirm that IL-2 suppresses protective immunity in early life, we infected one-week-old mice with RSV while neutralising IL-2. Mice in which IL-2 signalling was blocked showed an adult-like response with increased TFH, GC B cell and plasma cell numbers accompanied by a higher RSV-antibody titre and better control upon re-infection. This response however, required TFH help, because in mice where the TFH response was abrogated, the increased humoral response was not observed, even in the context of IL-2 neutralisation.

Overall, our work shows that, while there is a strong antibody response against RSV re-infection in adults, this is diminished in early life due to an enriched IL-2-STAT5 signalling that hinders TFH differentiation. So, growing up is not too bad! We were pleased to have our study published nevertheless, our work doesn’t finish here since more research needs to be conducted focusing on early life immunity to apply this knowledge into therapies and vaccines that will help us combat childhood viruses such as RSV. Even though here we have shown a detrimental role for IL-2, which suppresses humoral immune responses in early life, the IL-2 signalling pathway is critically used by a number of lymphocyte populations – Tregs, TH2 cells, NK cells, ILCs… you name them! – which might explain why IL-2 signalling needs to be upregulated in infancy. Our work therefore highlights a fundamental difference between the early life and the adult immune landscape and a crucial need to study and understand early life as a distinct immunological context in order to provide better therapies specialised for this targeted age group.

Our work therefore highlights a fundamental difference between the early life and the adult immune landscape and a crucial need to study and understand early life as a distinct immunological context.

Present your work at BSI Congress 2022!

Abstract submission for oral presentations has now closed, but you can still submit an abstract before Friday 28 October for the chance to present your work as a poster.

We also have a dedicated poster topic ‘Education, public engagement and EDI’ for abstract submissions to showcase innovative techniques being used in immunology teaching, novel approaches to engaging with the public on immunology and best practice examples of promoting diversity and inclusion within immunology.