In order to be capable of engaging the key elements of adaptive immunity (specificity, memory, diversity, self/nonself discrimination), antigens have to be processed and presented to immune cells. Antigen presentation is mediated by MHC class I molecules, and the class II molecules found on the surface of antigen-presenting cells (APCs) and certain other cells.

MHC class I and class II molecules are similar in function: they deliver short peptides to the cell surface allowing these peptides to be recognised by CD8+ (cytotoxic) and CD4+ (helper) T cells, respectively. The difference is that the peptides originate from different sources – endogenous, or intracellular, for MHC class I; and exogenous, or extracellular for MHC class II. There is also so called cross-presentation in which exogenous antigens can be presented by MHC class I molecules. Endogenous antigens can also be presented by MHC class II when they are degraded through autophagy.

MHC class I molecules are expressed by all nucleated cells. MHC class I molecules are assembled in the endoplasmic reticulum (ER) and consist of two types of chain – a polymorphic heavy chain and a chain called β2-microglobulin. The heavy chain is stabilised by the chaperone calnexin, prior to association with the β2-microglobulin. Without peptides, these molecules are stabilised by chaperone proteins: calreticulin, Erp57, protein disulfide isomerase (PDI) and tapasin. The complex of TAP, tapasin, MHC class I, ERp57 and calreticulin is called the peptide-loading complex (PLC). Tapasin interacts with the transport protein TAP (transporter associated with antigen presentation) which translocates peptides from the cytoplasm into the ER. Prior to entering the ER, peptides are derived from the degradation of proteins, which can be of viral- or self origin. Degradation of proteins is mediated by cytosolic- and nuclear proteasomes, and the resulting peptides are translocated into the ER by means of TAP. TAP translocates peptides of 8 –16 amino acids and they may require additional trimming in the ER before binding to MHC class I molecules. This is possibly due to the presence of ER aminopeptidase (ERAAP) associated with antigen processing.

It should be noted that 30–70% of proteins are immediately degraded after synthesis (they are called DRiPs – defective ribosomal products, and they are the result of defective transcription or translation). This process allows viral peptides to be presented very quickly – for example, influenza virus can be recognised by T cells approximately 1.5 hours post-infection. When peptides bind to MHC class I molecules, the chaperones are released and peptide–MHC class I complexes leave the ER for presentation at the cell surface. In some cases, peptides fail to associate with MHC class I and they have to be returned to the cytosol for degradation. Some MHC class I molecules never bind peptides and they are also degraded by the ER-associated protein degradation (ERAD) system.

On the surface of a single cell, MHC class I molecules provide a readout of the expression level of up to 10,000 proteins. This array is interpreted by cytotoxic T lymphocytes and Natural Killer cells, allowing them to monitor the events inside the cell and detect infection and tumorigenesis.

The usual process of antigen presentation through the MHC I molecule is based on an interaction between the T-cell receptor and a peptide bound to the MHC class I molecule. There is also an interaction between the CD8+ molecule on the surface of the T cell and non-peptide binding regions on the MHC class I molecule. Thus, peptide presented in complex with MHC class I can only be recognised by CD8+ T cells. This interaction is a part of so-called ‘three-signal activation model’, and actually represents the first signal. The next signal is the interaction between CD80/86 on the APC and CD28 on the surface of the T cell, followed by a third signal – the production of cytokines by the APC which fully activates the T cell to provide a specific response.

Human MHC class I molecules are encoded by a series of genes – HLA-A, HLA-B and HLA-C (HLA stands for ‘Human Leukocyte Antigen’, which is the human equivalent of MHC molecules found in most vertebrates). These genes are highly polymorphic, which means that each individual has his/her own HLA allele set. The consequences of these polymorphisms are differential susceptibilities to infection and autoimmune diseases that may result from the high diversity of peptides that can bind to MHC class I in different individuals. Also, MHC class I polymorphisms make it virtually impossible to have a perfect tissue match between donor and recipient, and thus are responsible for graft rejection. 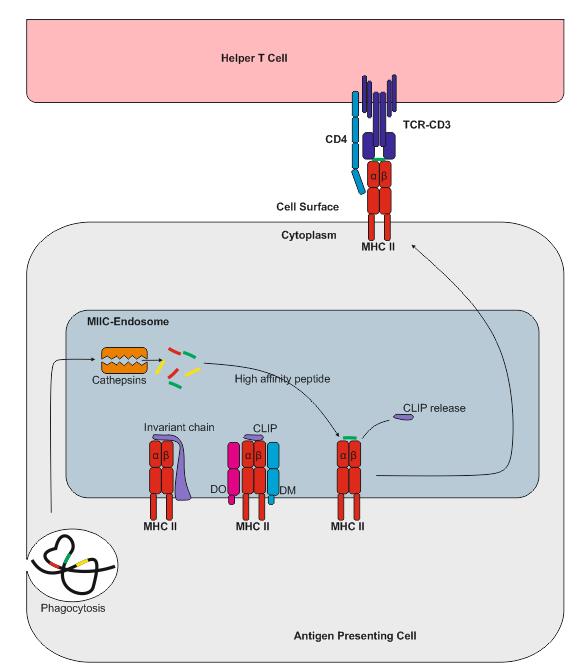 MHC class II molecules are expressed by APCs, such as dendritic cells (DC), macrophages and B cells (and, under IFNγ stimuli, by mesenchymal stromal cells, fibroblasts and endothelial cells, as well as by epithelial cells and enteric glial cells). MHC class II molecules bind to peptides that are derived from proteins degraded in the endocytic pathway. MHC class II complexes consists of α- and β-chains that are assembled in the ER and are stabilised by invariant chain (Ii). The complex of MHC class II and Ii is transported through the Golgi into a compartment which is termed the MHC class II compartment (MIIC). Due to acidic pH, proteases cathepsin S and cathepsin L are activated and digest Ii, leaving a residual class II-associated Ii peptide (CLIP) in the peptide-binding groove of the MHC class II. Later, the CLIP is exchanged for an antigenic peptide derived from a protein degraded in the endosomal pathway. This process requires the chaperone HLA-DM, and, in the case of B cells, the HLA-DO molecule. MHC class II molecules loaded with foreign peptide are then transported to the cell membrane to present their cargo to CD4+ T cells. Thereafter, the process of antigen presentation by means of MHC class II molecules basically follows the same pattern as for MHC class I presentation.

Like the MHC class I heavy chain, human MHC class II molecules are encoded by three polymorphic genes: HLA-DR, HLA-DQ and HLA-DP. Different MHC class II alleles can be used as genetic markers for several autoimmune diseases, possibly owing to the peptides that they present.